This is just part of the story of some fine folks.

A family in immediate crisis:  In January '10, the coordinator from STeP Up took me to meet a family; the father of four had lost his arm in a traffic accident and almost died.  Step Up had helped with medical care costs, but he'd lost his only means of income.  He was a taxi driver.  Now, the family subsists on food gathered from the countryside.  When I met the father, he was in the woods, cutting firewood with a machete and carrying it back to the house, one handed.   While we talked, the boys came in with bags of fruit they'd gathered before walking several miles to school.  They have nothing at all and an uncertain future.  We're stretched thin, but we've added them to our efforts to help.  We need help to keep the kids in school and to help the family get back on their feet. 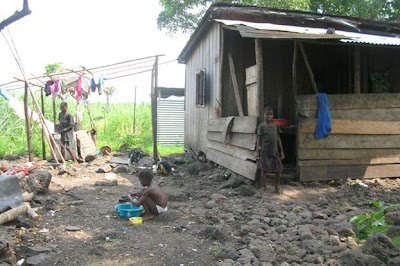 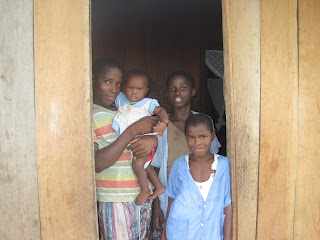 A generous friend of mine saw this and has begun a basic sponsorship for the family through our NGO!  They have a floor in the house and mattresses for the kids, now.  The need is great, though, and there are more opportunities like this one to come alongside and lend a hand.

With some help, the family has repaired their home and built a kiosk out by the road in front of their house. 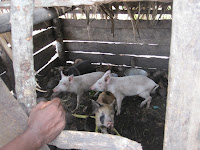 They'll sell rice and perhaps some vegetables they grow in a little patch next to the house.  Much hard work ahead still. 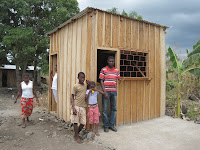 Oh, and pigs!  They have a breeding pair of pigs now. 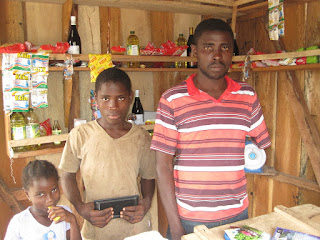 I got to visit the family and drop off a few books and things for the kids.

Inside the family's kiosk, dad and a couple of the kids almost smile for the camera.  The good news that greeted me; all the kids passed their academic year to the next grade. The older boy passed his sixth grade achievement test, a big deal here.  About 75% do not.  Brought him some books in Portuguese & English to celebrate and perhaps prepare for the 7th grade where he'll begin studying English.  The rest of the kids were more excited about some balloons sent by the bookstore manager in Lisbon than they were about the books I brought.

Thanks to help from friends, this family has a plan that's working.  Poppa embraced me warmly and offered sincere thanks as we were leaving.

We've arranged for a business accounting instructor to teach bookkeeping and inventory basics to mom, dad, and oldest son.  Got an email from our NGO rep that coordinates our efforts there, "They're so joyful," she says of the family, "now that they have hope!"  The family photo (right) is typically formal; only the younger daughter is smiling for this Christmas pose.  Note the new floor and walls.

They've purchased the pipe and fittings to bring water to the house from a line running nearby.  Dad and the older boy are digging the trench by hand to lay the pipe this month.  Little by little, they're making progress and again convey their thanks to their friends who are walking through these times with them.  You're so welcome, my friend.  It's our genuine pleasure to be part of your lives.  You've taught us so much.

They've got water at the house now (a spigot in the yard) so they don't have to walk the mile to the river for water any more!

With a garden next to the house and pigs in the pen in back, they're pretty busy.  They laid the pipes themselves (dad and oldest son).  When we visited, they beamed with pleasure at the good progress they'd made and escorted me to each improvement, explaining with pride what they'd accomplished.  Down the road a quarter mile from the house, they have a field they're cultivating.  Corn, tomatoes, okra; the two acre field is doing well.  And, they're they've begun building a pen for ducks!

Update:  JAN '12, they've finished laying pipe for water to the field!  Financial assistance along the way, tutors for the kids, some medical help, and a lot of hard work by the family have brought them up to being able to feed themselves plus have excess to sell, and to have hope for a future for their children.

The success story is theirs, of course.  They've done all the work themselves, persevering through hard times.  Fine folks, and an encouragement to us all.

Stopped by to visit in June; they were happy for the opportunity to show off their progress.  Their cultivated field is now about 500' square and producing well.

All but the youngest child are in school beginning September, and each is doing well.

The family sends their love and sincere thanks to their American friends who stood by them when the crisis came.  What a joy!

Oh, and dad has had his driver's license reinstated!  He'll be returning to work part-time; it will make a big difference for them all.

Update FEB '13 - The country's rural electrification program brought power to their area.  They had been running a generator a couple of hours a day so they'd have light in the house in the evenings, but fuel is expensive.  Now they have cheap power!  And a TV.  And mom can iron clothes which, I'm told, is really a big deal.  Great news, and we get to be a part of it with them.

If you're curious, send us a note. We'll be glad to introduce you around.